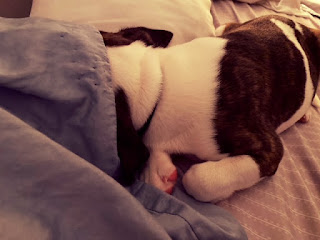 We got new pillows.  Not the standard, run of the mill pillows, either.  We invested in fancy AF pillows. We waited for the BOGO deal, and combined that with the Black Friday sales, and we pounced. However, perhaps I should have taken the many failed attempts at completing the online order as a hint.  This may not be the dream that we had envisioned.

Once the order was completed, our new custom cushions arrived rather quickly.  I say custom, because the promotion allowed us to mix and match between a few options.  Ya, that's right.  We fancy.  I opted for the one that is supposed to feel cool to the touch.  Honestly, is there anything better than feeling cold sheets against your skin?  Plus, the fact that my temperature consistently runs at hellfire degrees. It seemed like the perfect pillow pairing.  My hubby opted for the one that looked super futuristic, with a magical mix of bamboo and charcoal.  It also looks like one of those chocolate poke cakes.  The ones where you make holes in the cake with a wooden spoon and then poor caramel in them?  Mmmmm..... Poke cake.

Obviously, as soon as they arrived, it was an immediate competition about whose pillow was primo. Find out who the true comfort connoisseur is.  One firm, one soft.  That's what she said?  The answer seems glaringly evident, right?  I mean, mine actually changes temperature, FFS.  Yet, after being totally unbiased and trying each other's choices out, we were at an impasse.  Cool versus cushy.  There was only one way to solve this.  We called the boys in from their rooms.  It was bedtime, but this was important.  As you can imagine, the littles were quite perturbed by being pulled from their beds.  They showed their dismay by screaming and giggling racing down the hall and ending with a leap from the door to the bed.  They both took their turns trying out each option.  Their methods were questionable, though. Their heads barely touched the pillows and then they pushed each other around and switched places. In the end, it was a draw.  Each child siding with a parent, rather than the actual pillow.  They must not have noticed the chill.

When I woke up the next day, I realized that I had made an error.  Although, the temperature of my pillow was lovely, the firmness of it had made me wake up stiff.  This was not good for business.  This was pillow gate.  I guess the questions was, how big was my pillow pride?  How could I admit that my pillow wasn't perfect?  I found myself craving the softness of the poke cake.  And just a poke cake, in general.  I slyly asked my husband if we could trade pillows the next night, so that we could try each others.  That's all it took.  He knew mine was not comfortable and, without me having to say it, we knew which one was the sleep supreme.

Here's what I didn't know.  Fancy AF pillows are a final sale.  I guess that makes sense.  Especially with COVID.  Who wants to risk getting a pandemic pillow?  So, while I am learning to get used to my cool concrete cushion, my hub snoozes away peacefully on his char-boo. Probably dreaming of chocolate and caramel.