March 27, 2019
We have a new family member.  We finally gave in and got the boys a pet.  His name is Bubbles Slingshot.  Yes he as two names - first and last.  He lives in a small tank, on our kitchen counter.  In case you hadn't guessed - he is a fish.  A Beta fish, if we are getting technical.  Bubbles, or Mr. Slingshot as I like to call him, is our introduction to caring for a pet.  He is also our place holder, or diversion, until it is time to get a dog.  My husband and I are both dog lovers.  We grew up with them and have always wanted to get one.  But, until everyone can wipe their own butts, without assistance, in our house, Mr. Slingshot it is.

The boys are extremely pleased with their new charge.  So far, they seem to have taken a vested interest in his survival, taking turns feeding him and checking in on him.  Let's hope this continues....  Taking the boys to get Mr. Slingshot was not what I had pictured.  I envisioned a pet store, with a bunch of bright aquariums, filled with colourful varieties of fish.  My boys would press their beautiful faces up to the glass, in awe and wonder. And then, without any disagreements or arguments (just go with it), they would pick which one they wanted.  Then, the lovely sales person would come over, with their net,  and "fish" it out.  This was not exactly what happened.

We went to a new, fancy looking pet store near us.  Now, keep in mind we don't have pets, so, we were pretty surprised and slightly embarrassed, when we realized that this pet store didn't sell any pets.  Is that even still what it is called? Selling pets?  Back to the car and back to Google.  Find "pet stores that sell fish near me".   Lucky for us, there was one right around the corner.  The second store had a name that I had never heard of before.  It was also tucked in an strip mall, that I had been to a ton of times and I had never noticed it, but, I just walked into a pet store that didn't sell pets, so WTF do I know?  We walk in - no aquariums.  OMG, not again.  The store seems a little dim, disorganized and very quiet...something seems fishy...?

"Do you have Beta fish?"  I hear my husband ask.  The sales person nods, expressionless face and points.  There, on the end of a disheveled aisle, is a shabby and worn sign, that says Beta Fish.  And there is Mr. Slingshot and his buddies, all stacked in separate flimsy, plastic containers, that are covered in dust.  Pet expert I am not, but I do know that they cannot be kept in a tank together because they will fight.  But, this just seemed so sad.....and odd.  My anxiety immediately fires up - Why aren't they swimming around?  How long have they been here, in this shadowy, little place?  Are they depressed?  Before I could spend more time obsessing, the boys make their choice.  This may have been the fastest collaborative decision they have ever made.  I think they also realized that we were in the place where Beta fish go to die.  Not today....not...today.  We picked him up, wiped the thick layer of dust off of his container and brought him home.  I didn't dare look back at the others, when we left.....

We put him in a small tank, with some bright rocks and a plant.  From what I can tell, he seems pleased.  I think he may have even winked at me.  His tank is in the hub of our home, where there are always sights and sounds.  The boys didn't disagree on picking him, so they made sure to have no willingness to compromise, when it came to his name.  So, he is now the fish with two names: Bubbles Slingshot.  I hope he isn't 100 years old, but only time will tell.  The inevitable toilet funeral will be in our future, but, if we are lucky, it won't be anytime soon.  Mr. Slingshot should have his time in the sun....or under the florescent lights, in my kitchen. 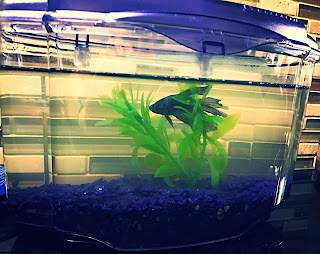