File 11 - Rumble in the Jungle Gym 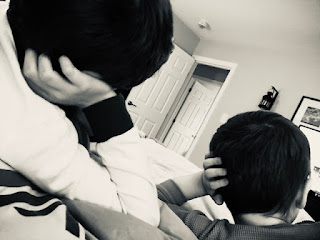 I have this vivid memory, from when I was in my early twenties.  I was waiting in line at a bank machine (that is what they were called back then).  The lady in front of me, was at the machine, and her two sons were to the left of her.  They were tussling with each other.  She was using her left arm to keep them from fighting, while her right arm worked the machine.  I watched this pandemonium  and thought to myself "THAT will never be me."  Oh, how the mighty, or the young and incredibly naive, have fallen.  If I had seen that flawless act of multi-tasking, now, I would have been in awe.  I see you, Mama, I SEE YOU.

Now, brace yourself because this is going to sound crazy, but.....I didn't think that my boys were going to fight.  Not physically, anyways. I know, I know. Cuh-razy.  My oldest never showed any inclination towards anger or violence.  He never bit or hit.  He never threw temper tantrums.  So, we were lulled into this false sense of confidence, that when our second came along, no matter what the personality, our oldest would never be persuaded to wrestle.  It just wasn't his jam.  Oh, all of the ludicrous tales we tell ourselves.  The first inkling of doubt started to creep in, when my oldest would spend hours building intricate roadways or cities, with blocks, and then, just as the last block was being placed, my youngest would crash through it, like the Marshmallow Man, from Ghostbuster's.  Insert maniacal laugh.  And, so, the present looks something like this:

In this corner, standing at 3'11" , and weighing in at 44 lbs, is The Sage.  He comes by this nickname because of his incredible quest for knowledge and his ability to retain details.  You want to know how to get somewhere in the city?  Forget the GPS!  This child will tell you every street that will take you there and, then, suggest the best route.  This is all from memory of travelling there himself or from studying maps, in his free time.  He is six!!!!  My husband always says that he would prefer to have my oldest help navigate us somewhere, rather than me.....using GPS.  I mean, I can admit when I have been outwitted.  Even if I have lived in this city for 31 more years than him and I drive...  Shame, shame, ding, ding.  What he lacks in physical stature and suppressed rage, he makes up for with nimbleness and being the "older brother".   There is not a monkey bar, that this little has met, that he hasn't conquered.  Future Ninja Warrior, perhaps?  Right now, he plans to be a construction worker, on Carling Ave, when he grows up.  Like I said...details.  His weaknesses - chocolate and his brother asking too many questions about movies, or games, or....well, life.

In this corner, standing at 3'4", and weighing in at 35 lbs, is Zero F*!ks.  He comes by his nickname because of his undying optimism and love for everything, and his willingness to jump into a full on dance off, no matter when...no matter where.  I mean he "really loves" our family, and yogurt, and the knight in Minion Rush, and the Dad waiting at the bus stop for his kids, that he doesn't know.  I believe that everyone could learn something from this child.  If only we could all love more, judge less and shed some f*!ks.  Then maybe we would all be up for a dance off, in the middle of an Old Navy, just because that beat got you like.....   His strengths include that he is built like a little brick-house and that he is a total charmer.  His magnetic personality has won over every human being he has come across.  His weaknesses - needing to ask his brother questions about movies, games,...life, and that he loves "everyone in the whole world", which, a detail pointed out by his brother, includes "bad guys".

Two boys, tussling on the ground.  Me, using one hand to keep them apart, and one hand to make something to eat.  Wait, what?  Yep.  THAT was me, standing at that bank machine.  Well, future me.  That pandemonium, is my pandemonium.  How strangely poetic.

Not this week.
mom of boys neurotic mama