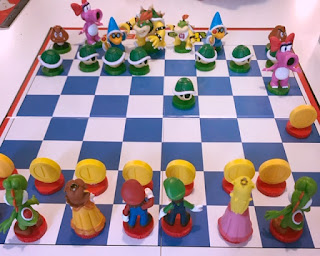 Have you ever played chess with a six-year old?  Let me tell you, if you have any control issues, or anxiety, this may not be the game for you.  The Easter Bunny brought my oldest a chess set, in the theme of his favorite video game, Super Mario.  The Easter Bunny thought this was a wonderful Easter gift.  It was not full of sugar (not that there wasn't lots of those), and it would foster this boy's brilliant mind.  Great in theory, right?

So, there we are, on Easter morning.  All of the eggs have been found and now my oldest is itching to play his new game.  Because his father was in the bathroom, seems rather convenient, and his brother doesn't know how to play, I become the lucky contender.  I hadn't played chess in years and was definitely in need of a refresher on how each of the pieces move.  But, I topped up my coffee and sat down with my little.  I mean, I am not one that likes to turn down a challenge.  Let's do this.

As I took out the instructions, and folded them so that I could reference the pieces, he moved his first pawn two spaces.  Wow, let's just take it easy.  I needed a hot minute, here,  to get myself orientated.  I could see him starting to fidget, in his seat.  Six year old attention span, at its' finest.  I inched one of my pawns out...one space.  I felt a little rushed, but I thought it was okay.  Then, my kid busts out his Queen.  WTF?  He is bringing out his Queen, on his second move?  This seems a little overly aggressive. I was not prepared for that shit, at all.  As I was contemplating this bold maneuver and consulting my reference list, I could see movement out of the corner of my eye.   My sweet boy had now picked two of his pieces up off the board and had them engaged in some midair battle.  Nope.  No, no, no.  Does this look like Don't Wake Daddy?  This is a game of strategy.  A methodical game.  A noble game, even.  You can't just be picking up pieces and swinging them around.  Even if they are Bowzer and Goomba.  I took a deep breath and asked him to put the pieces down.  He sighed, rolled his eyes, put the pieces down and then looked at me, expectantly.  Shit, it was still my turn.

So went the ebb and flow of the game.  Over-zealousness and feigned interest versus over-thinking and anxiousness.  Ya, it was great...?  Match made in some kind of Super Mario, checkmate hell.  I was completely stressed and he was completely over it, by the end. I kicked his butt, obviously.  Over-thinker for the win!  I may have also ruined the game for him. He didn't want to play another game with his Dad, or at all, for the next couple of days.  But, then, as I was beginning to feel like the biggest asshole ever, he challenged me to a rematch.  I looked at my beautiful baby and contemplated the psychological consequences of this pivotal decision.  What if I destroy him again? What if his pieces end up in another impromptu battle and he doesn't put them back in the right place?  What if my controlling tendencies hit their peak and I lose my crap?

Get me Mario and his army.