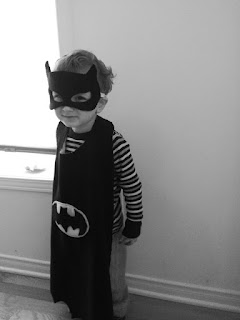 I have this strange, and some may say unhealthy, attachment to my oldest little.  Almost as if the umbilical cord was never fully cut.  Now, don't get me wrong, it is not that I favor him or love him any differently, than my baby.  It is just that I worry about him more.

For the first year of his life, this child would not go to anyone, except his father and I.  More than that, he didn't want anyone to talk to him, or even look at him.  He gave more people the stink eye, in the first few months that he was on the planet, than I am sure some do, in a lifetime.  I remember standing in line, to get a coffee, and him glaring so hard, from his stroller, at the guy standing behind us.  To the guy's credit, he smiled at the infant scowling at him.  But then, when the unbroken stare, began to pierce his soul, he started to shift and look around, awkwardly.  I can't say I blame him.  Who can hold still, under that kind of unwavering scrutiny? I apologized for my three month old's unprovoked hatred and moved to block the daggers.

Due to this inherent mistrust and skepticism of my baby, I barely handed him off and never left him.  Anxiety would begin giving her uninvited commentary, every time we had to go anywhere or would have anyone over to visit.  People are going to talk to him, and he is going to cry.  They are going to want to hold him.  They are going to think I am a bad Mom, because my baby hates everyone and screams his face off, when he is not with me.  And so my incessant anxiety and my suspicious baby, made me fiercely overprotective and we became attached at the hip.  I mean, literally.  If we were out anywhere, this baby was on my hip, and mine alone.  After torturing myself about it, for longer than I should have, I decided to accept that this was the nature of our relationship.  Us against the world, ride or die, against all odds...wait, Phil Collins??   My amazing doctor told me, that he was just trying to establish boundaries, with strangers and people in his life.  Mind....blown.  You mean, I shouldn't force my baby to be taken from me, against his will, in a situation he does not feel safe or comfortable???  And I shouldn't feel guilty about saying that people couldn't hold him???  Seemed logical. I let my baby be himself.

But then, he started crawling and walking.  And little distance by little distance, my sidekick started to explore the world, without me.  Currently, swallowing the lump in my throat, as I write this.  He still stayed close, when we were out anywhere.  He still eyed new people with a mix of doubt and horror.  Maybe he has something here, though. Is this something we should all do?  I mean, they could be a serial killer, for all we know.  The difference, now, was that once my little felt comfortable, he would wander out of our predetermined safety zone.

Before I knew it, words were coming from him and he was saying insane things, like "Can I go to Auntie's, for a sleepover?"  Surely, he meant with me, too.  But, no, that is not what he meant.  "Just me".  Say what now?  Soon, he was off to these sleepovers and then school.  Insert montage of tiny, adorable toddler, holding his mama's hand, turning into sweet little boy, with a schoolbag bigger than him, waiting for a school bus, to that same mama, with matted hair, ugly crying, with snot and tears streaming down her face, when the bus has driven away.

This past week, he asked if he could go to the park, all the way across the field, from where his brother was playing soccer.  No.  Absolutely, not.  No f**king way.  That is WAY out of the designated safety zone.  Then, after I politely decline the inquiry, a boy that is clearly younger than mine, makes his way across the field to the park.  Shit.  I look back at my little and he motions towards the park, again.  Against all of Anxiety's screaming protests, I know what I have to let him do - establish boundaries.  But with me, this time.  Heart smashing into a million pieces.

I appeal to the cynical infant, that I hope still exists in there, and go over the basics.  Don't talk to strangers.  Don't go anywhere with anyone.  Come to the edge of the park and wave, ever so often, so I know you are okay.  Everyone grown-up is your enemy. Then, he turns and walks across the field.  Alone.  And I feel like my heart is unraveling and he is the string end. I squint so hard, for the next 20 minutes, trying to catch glimpses of him, that my face hurts.  Before I need to go and get him, he comes back.  Safe and with a new sense of independence.   I am proud of him and I am proud of myself.  Until next week, when I have to let him go, again.  FFS. Although, a friend suggested walkie talkies and another suggested a fanny pack, which I think is brilliant.  And maybe a reflective vest?  Too much?

Not this week.
anxiety mom of boys