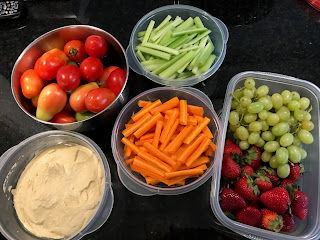 I love eating.  When I am not eating, I am thinking about eating.  Or talking about food.  Or pinning recipes.  Or watching the Food Network.  And, I love to cook.  I couldn't wait to share this love with my boys.  Here's the thing, though.  Kids are savage AF, when it comes to food.  I clearly remember my husband saying that our child was going to eat whatever we were having.  Before he started eating solid food.  Ah, the silly, naive things we tell ourselves.

Things didn't start out, overly positive.  My first born seemed indifferent about eating.  He would barely finish a bottle and it would take him FOREVER! This was very unsettling.  Wasn't he starving?  I would just wait it out, with him, crunching away on the snack I had prepared.  Things began looking up, when he started on real food.  I could blend anything in that baby blender, and he would eat it.  I mean, he wouldn't eat a lot, but he would eat it.  My husband and I high five-ing because our baby was eating exactly what we are having.  Ya....

Here's the thing, once he could feed himself, he became the most formidable food critic. He would await his supper, with an adorably smug look on his face.  As the meal was placed in front of him, he would scrutinize every aspect.

And, just to keep the chefs on their toes, he would mix it up.  One day he would like pizza and eat it all up, and the next day, he would hate pizza, and not even be able to bring himself to touch it.  W...T...F?  Now, our kid is not only not eating, what we are eating, but, he is not eating, what he is eating!

The second little seemed more promising, to follow in Mama's food adoration.  This baby would chug his bottles.  And his sippy cups.  Like a college kid, at a keg party.  Throw his head back and down it, until he was gasping for air.  He would clear his tray, at supper time, and I caught him, more than once, eating dust bunnies, off of the floor.  Look over, the baby looks like he is chewing something, long piece of hair sticking out of one side of his mouth. And then the gagging would start.  Not him.  Me.  So gnarly.

But then this child learned to talk.  And now, we had two opinionated critics, joining us at the table.  Arms crossed.  Judging.

The bad reviews keep coming.  But, once in awhile, you get a good one. In the interim, we use two tools to survive meals - piles and bribes.  If we make them a pile, even with the spicy chicken and the green things in it, they will eat it.  I have no idea what kind of magical sorcery this is, but it f**king works!  And the time tested bribe of desert or a treat.  If my kid is going to eat their salmon and asparagus, than they can have a frigging treat.  It is an offer that they can't refuse.  Insert evil laugh.

I am hopeful, that as they grow, so will their appetites and love for food.  For now, I will do my part, by finishing what they don't.  Just trying to be an upstanding citizen.  Do they eat what we eat?  Most days.  But it is in a pile, with a promise of desert.

Does Mamma need to lose her shit?