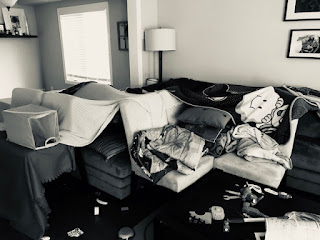 Ding dong!!!  The sound that makes my family stop in their tracks and act totally erratic.  Everyone listening to the instant internal dialogue, that this foreign sound ignites.

My husband - It is going to be a sales person.  I am going to be forced into an awkward conversation.  Maybe it will be the meat selling guys, that my wife let in that time, and they just kept coming back.  I am going to go and stare out my oldest's window, in the shadow of the curtains, like the biggest creeper ever, and see who it is.  There is no way, I am answering.

Me - It is a serial killer.  They have been watching the house and they know that my husband is out of the house. Oh, wait.  He is here.  It doesn't matter, it is definitely a murderer. This is his shtick.  Ring the doorbell...attack.  Well, I'll show him (no sexism here, 96% of serial killers are male, refer to the File 14 - 300; cabinet marked "Random Shit").  There is no effing way, that I am answering.

The littles - It is anyone!  It doesn't matter because it is someone!  Maybe it's Nanny!  Maybe it's Grandma!  It's probably someone bringing a present.  Or a dog!  It could be a pizza guy or a complete stranger!  It doesn't matter!  This is the best!!!!!  Why are our parents telling us to be quiet?!?!?  Don't they understand how exciting this is??  Let's be as loud, as possible, so they know we are here, and run and open the door.

I guess that our one saving grace, if it was a serial killer, is that our house is a booby trap of crap.  Sounds like something Dr. Seuss would say, "It was a trap. A booby trap.  A booby trap of crap". Good luck making it through the front entrance, without tripping on a shoe.  It is basically an enter at your own risk, if you show up at our place, unannounced.  Because, no matter how much we straighten up or clean, it always looks like a toy explosive has detonated, in our living room.  I mean, every corner of the house - a minion, a marker, a car, my sanity.

I used to be so obsessive about a clean house.  I think it was ingrained in me, from a young age.  My mom was a therapeutic cleaner.  At times, a rage cleaner, I dare say? I remember waking up, as a teenager, at some ungodly hour, like noon, and hearing the music blaring.  And I knew.  She was on  mission.  And she was very possibly pissed.  Most likely at me. Because I was still in bed, and my room was a shit hole, and it was noon....

But, when I got my own place, it started.  The therapeutic/rage cleaning became a Saturday ritual.  Then, I understood.  You clean your house on a Saturday morning and you have the rest of the weekend to chill.  It felt good.  You blare your music and clean out all of the chaos that the week has unloaded, in your brain.  And, if anyone stopped by, you were good.....unless, they were a crazed maniac.

Then the tiny people moved in.  The Saturday ritual became interrupted and hurried.  Completed between breaks of feeding and changing.  Then, your miniature selves start walking.  That is when their mystical powers are activated.  Every breath you take, every move you make...they will go behind you and leave three toys, for every one that you pick up.  Without you even knowing....  This miraculous capability is astounding to the mere mortal parent.  You clean up, take two breaths, turn around, and there is crap everywhere.  I have never seen anything like it, in my life.  As for your Saturday morning therapy session?  Like I have said before, these tiny magicians have no time for your shit! NO TIME!!!!

So, when that chime rings through the house, the struggle is real. The hubby heads to the stairs, to leer out the window, like an eerie voyeur.  Those meat bastards aren't getting in, this time.  I freeze, contemplating weapon location and exit strategies, and then look at the complete chaos of the house, and realize that even allowing someone we know into this pandemonium, would be a total disaster.  The kids jump into action, like a Pavlonian response, maneuver like ninja warriors, over all of their mysteriously placed crap and charge at the door.  If it is you, on the other side, I am sorry.  Don't look up at the window, watch the shoes in the front entrance and enter at your own risk!