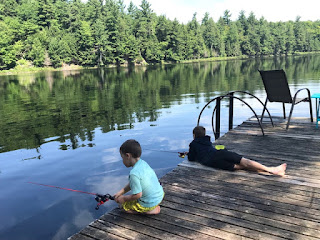 I read an article, this week, about how true crime conversations, usually start early.  You hear your first murder story, sitting around a camp fire, at your first summer camp.  It is likely fiction, or so loosely based on a true story, because your friend's sister told her the story, and she heard it from her boyfriend's step brother, who swears his uncle lived next to the grandmother, of the victim.  A good old fashioned game of homicide telephone.  That's my kind of game.  And, inevitably, you tell the story, or what you remember of it, the next time that you are in the forest.  So begins the lifelong obsession with murder.  It's a right of passage, really.

What is it about the woods, that sparks these dark narratives? I think it is that when you are out with nature - the trees, the rocks, the dirt, the lake - you revert to your wild self.  I don't mean the - do too many shots of tequila and dance on a table, wild self - but your primal, wild self.  Like, that commercial about children living their wildhoods.  There is definitely something to this.  I have watched that shit happen, in real time, this week.

My oldest little is a techy.  By that, I mean that he is enamored by anything electronic.  I know, I know, what kid isn't, these days?  But, this child could unlock my phone, before he could consistently use the potty.  He also really loves books.  Atlases, mostly.  Any kind of reference guide that includes maps, or flags, or a legend.  Forget watching the interactions of that cheeky, British pig family, he wants to know where in England they live, what languages they speak and which towns surround them.  Don't get me wrong, it is not that he doesn't like playing outside.  Monkey bars are his jam.  It is just that his brain seems to be in a constant state of fact-finding.  So, the day that he said "I want to catch a fish and eat it", I just assumed he was regurgitating a fact.  People catch fish and they eat them.  Or maybe he was just dropping a hint that he wanted to go out for fish and chips.  Mmmmm, fish and chips....  I mean, he is my kid, after all.

But, he wasn't being as subtle, as all that.  He was being literal.  Literal as f**k.  So, when we took our vacation to a beautiful cottage, this week, and his uncle asked him if he wanted to go fishing, he jumped at the chance.  Anxiety spoke up because she just can't help herself.  What if he falls out of the boat?  What if he catches himself on a hook? What if it traumatizes him to see what actually happens to the fish?  Ugh.  Who invited this bitch on vacation?  I wasn't going to let her nattering stop my boy from living his best cottage life.  So, we sat and watched our little man head out into the lake.  Me, with a heart full of pride, Anxiety with smug horror.

The fishing trip turned out to be a bloody massacre!  Okay, that may be a bit of an extreme description - you know, that backwoods lingo.  Seriously, though....there was blood spatter.  My sweet little boy caught his first fish but I guess the hook was in there real good.  As my brother-in-law wrestled with their aquatic captor, blood and guts flew out and landed on my little's knee and my two-year old nephew's face.  It was a blood bath!!!!   Was my child phased?  No.  My nephew?  Nope.  These babies have found their wild selves.  In fact, my little proceeded to watch a fish be gutted, the head cut off, it cooked and then he ate it.  He has spent virtually every waking moment, since we have  been here, in the lake, on the boat, or fishing off the dock.

I am sure, one day, he will sit around a campfire and tell a murder tale of his own.  Maybe it will have remnants of the his first blood-soaked fishing trip.  But, I have no doubt that it will be his wild self.  And, if he is anything like me, it will become a life long obsession.  The forest, the wild self, murder.