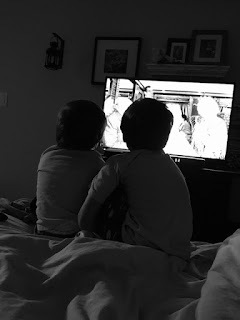 "Who needs waterboarding, when you can watch four hours of the children's network."  It was 10pm, on a Thursday night.  The hubby and I had been attending a wedding and Grandpa had agreed to babysit.  When we got home, he looked exhausted and bleary-eyed.  He was laying in our bed, a children's show on, and two very awake and overtly self-satisfied littles, next to him.  We couldn't help but laugh.  We knew this form of torture, we knew it all too well....

The television is a bit of a point of contention, in our house.  I am just going to say it.  Children's shows are hell.  Pure song singing, lesson learning, technicolour hell.  But, here's the redeeming quality of this cartoon inferno. I hold the remote.  I have the control.  I'm the captain now.  We have pretty basic kids' television rules.  During the week, they get to watch their shows before school and an hour before bed.  Then we sprinkle in some movies, on the weekend.  This keeps our tolerance level, aka overall sanity, at an appropriate level.  Keeps the urges to tell an animated forest creature to "Shut the f**k up", at bay.

The littles do not respect my television time, on the other hand.  I ain't even going to pretend that my shows are any less obnoxious.  It is a salty mix of bitchy housewives from various states, cooking documentaries and murder.  Has there ever been a better combination???   A cocktail party gone horrifically wrong, there, a deconstructed beef wellington, here, an unsolved double homicide, there.

With the exception of the cooking shows, these are definitely not kid friendly choices.  Obviously, I have to wait until the babies are in bed, before I can watch them. My PVR packed full of shameless grown up programming.  But...it....never....fails.  I get the boys down.  I get the snack that I have been dreaming about for the last hour, while we watched the show where the two children and the robot chase the troublemakers through the movie theater....for the 50th time.  Just as I get comfortable and my show starts to get good, a child appears.  PAUSE.  They stall, trying to think of a question, while checking out what is on the TV and looking to see if there are any treats being consumed.  I order them back to bed and listen to their marching footsteps down the hall.  Sigh.  Okay, back to the good stuff.  PLAY.  Less, than ten minutes later, "Mommmmyyyy!"  Ignore it.  "Mamma!  Mamma!"  The voice sounding more insistent.  I am sure he is fine.  Wait, what did that witness just say?  REWIND. "Mommy!  I need you!"  Is he crying?  Anxiety thinks maybe something is really wrong.  PAUSE.  Get up, walk down the hall to his room.  A little bit of worry creeping in.

His pillow fell out of his bed......  He..dropped..his..pillow.  Honestly, this child could take the matter-of-fact hand off of his hip and reach down and get his pillow, without moving another muscle.  What the f**k is happening?  And so I declare my first "Are you kidding me, buddy?!?!?!" of the evening and march myself back to my room.  I get cozy again and wait a full minute, listening.  Pure, beautiful silence.  PLAY.

Just as the officers are receiving the DNA results, "I have to poop." PAUSE.  The other little marches himself through the room and into the ensuite.  "I have to poop, too!"comes from down the hall. Apparently, the the other one has solved his pillow emergency and will be moving onto scene 2.  STOP.  Shit.  No pun intended.  I give up.  After two bathroom breaks, several "Are you kidding me, buddy!?!?!'s, and an electronic confiscation threat, the boys are asleep. PLAY. But, I never see the end of my show because I fall asleep.