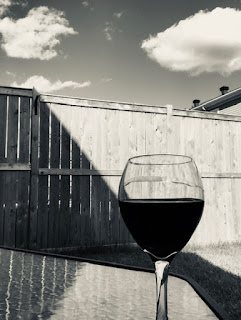 "Go shorty, it's your birthday.  Gonna party like your 4 year old has a fever and a hangover lasts two full days."  Wait, that's not quite right....  3 full days.  A hangover lasts 3 full days.  This pretty much encompassed my birthday, this past weekend.  A little more red wine than was necessary, here, a cold air humidifier, there.  Nothing says party like sipping red wine, alone, and watching murder docs.  I mean, I was up until 11pm.  If that's not gangster, than I don't know what it is.  Am I right?

Remember the caboose parties?  Those were the shit.  I was chatting with a friend about those, last week, but she was too young to have experienced them.  The wondrous, creepy last railroad car that used to be parked in everyone's favorite fast food restaurant parking lot.   Like some psychotic looking clown, with blood red hair and nineties drawn on eyebrows, dropped it there, in the middle of the night. That is how I picture it happening, anyways.  I remember fearing that the jester with the imposing grin and his escaped convict bestie, with a propensity for burgers, would be waiting outside, to enter at the caboose, at any moment.  But, thank goodness for french fries and chicken nuggets.  NO ONE is going to make me abandon my fast food feast.  Even if they are the most horrifying mascots, the world has seen.  That's how we did it, in the eighties.  Everything on the verge of manic and menacing.  Those way too colourful, gawdy and cramped space parties, were my favorite.

My cousin, that I am really close with, used to come down and visit, for my birthday.  I remember when I was turning maybe...8 or 9, which would have made her 7ish, she got me a globe for my birthday.  This was the thing I wanted the most in the world, at that time.  Insert fake laugh to mom joke, here.  Anyhow, we were learning all about natural disasters at school and I was obsessed.  Anxiety wanted us to know everything about these occurrences, so that we could be prepared.  It was a dark and windy day, when my cousin arrived that year.  After opening my favorite present, the two of us ventured across the street to the park.  As we played, I rattled on about tornadoes.  The wind continued to pick up and the sky became completely clouded over.  It was as if my words were playing out in real life.  Well, in our childish minds, anyways.  Before I knew it, we were running home, screaming our f**king heads off.  Love you, K.  I would run from a fake tornado with you, any day. As strange as it may sound, this is one of my most fond birthday memories.

When I was in grade 8, one of my friends planned my one and only surprise party.  It was one of the most extraordinary birthdays, I have ever had.  Anxiety was at her all time obstinacy.  You are so awkward. You are not pretty.  None of the boys like you.  Then, wham!!!!  Even she didn't see this coming and by the time she did, it was too late.  I felt so stunned, so special, so lucky.  It was also my first "mixed" party.  We all acted awkward AF.  Girls talking in this corner, boys acting way tougher than they were, in that corner.  You know, the nineties, all gender specific and incredibly unauthentic.  But, that was all we knew.  Nevertheless, it was one of my favorite birthdays.  The shock made it all worth it.  Or that people actually came.  Or that my friend cared enough to plan it.  Or that Anxiety couldn't ruin it, before it even started.

I guess the point is, is that birthdays change, over the years.  That whether you are hiding from a crazed clown and an escaped convict, running from a fictitious act of nature, feeling surprised and loved or nursing a sweet baby with a cold, while watching homicide and sipping vino tinto....the point is the same.  You were born on this day.  And, even if you are celebrating alone, you take the time to acknowledge that shit.  And maybe one day......the caboose will be back........