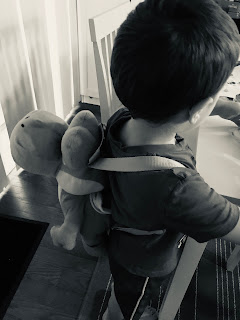 It is Saturday morning.  It is mid morning, although it feels way later than that.  Most likely because, two beautiful, little, matching haircut boys, one small, one taller, materialized next to my bed, before the sun was up.  It's kind of like waking up to Village of the Damned.  Before your eyes focus, they look the same.  Are the talking in tandem?  I murmur as many "10 more minutes", "Mommy will be down soon", "Just give me until 7:30", until the juvenile judgement wakes Anxiety and she continually nudges me, reminding me that they are probably starving.

So, I make my way downstairs.  I turn on the coffee, close my eyes and hope for a record breaking brew time.  I make the boys pancakes - one plain, with syrup and one with chocolate chips, no syrup.  Once they are settled, I get the biggest mug that I can find and settle on the couch, with my murder book.  Yes, that's right, I am reading murder fiction, now.  It's my murder fix, for when it is inappropriate to be watching the ID channel and when it would be just plain rude, to have my big head phones on, to listen to my fave murder pod.  Also, then I would miss delightful nuggets like these.

"Any last words, Mama?"  I peer over my book.  There he stands, big black eyes blinking, expression somber.  He is holding some random toy, as if it were a 9mm.  I mean, I shouldn't be shocked.  This isn't the first time that this particular child has come out with some questionable remarks.  Some of my favorites include: "I shoot puppies" and "He is not dead.  So, I will put him in a car and light it on fire, and then he will be dead."  Is that premeditation??? Seriously, where was this child raised?  In a home with some true crime obsessed, overly anxious, ravenous maniac?  I put down "The Third Victim" paperback and my "My Favorite Murder" mug.

I take his gorgeous, just over toddler body, in my arms and tuck that beautiful head, under my chin.  He is so long now, that his legs reach past my knees.  I fight the lump rising in my throat, thinking of when he was in a barf stained sleeper and had a big diaper booty.  I try my best to stumble through why guns are bad and how what he said is not nice, without using too many technical terms, like DNA or ballistics.  Then my mind wanders to the question, at hand.  "Any last words, Mama?"

How about - I never knew love or fear, until you and your brother were born.  How, I have never felt so tired and so happy, in the same moment.  How, I never knew I could half asleep, sitting up.  Now, if that is not a skill, I don't know what is.  I may try that, at the next event I am at.  How, every breath, thought, decision, telling Anxiety to f**k off, reason to get out of bed, everyday, has been for you...because of you.  Then, he squiggles out of my arms, puts his fake firearm down, and is on to the next thing..

"You did this."  Really, Anxiety?  Obviously, she isn't going to take any ownership.  Shady, AF.  As usual.  But, really, where did my sweet angel learn such things?  I run through the shows, on the current roster, in my head.  Fancy Nancy.  I mean, she is so f**king high maintenance, but I am pretty sure she isn't taking anyone down with a gun.  Paw Patrol.  Maybe, if they were backed into a corner????  That is called self-defense.  Full House.  This is a new one on the list and a definite throwback for me.  Let me tell you, there is way too much kissing and personal failure, for a baby, but no gun violence.

Hmmmm....  I have no idea, where my little man could have learned such things.  In all honesty. if I get to hold him...breathe him in, for a fleeting second, than we will work through the rest.