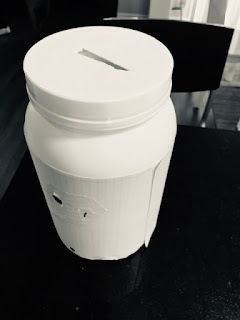 Do you remember your first piggy bank?  I don't.  I think it is because, when I was a kid, every dollar I received, burned a hole in my pocket.  I would literally take the dollar, march down to the corner store, take a small brown paper bag, and fill it with the exact amount of penny candies, to make sure every last frigging cent of that dollar, was spent.  Hot lips, coke bottles, sour balls - no man was left behind.  Well, except slushy....  I see you, boo boo.  Next dollar, for sure.  And, so went my saving prowess, until I was college.

My oldest is my antithesis, when it comes to elementary school financial planning.  We have actually had to upgrade his piggy bank.  Well, I am not sure if upgrade is the right word...  He used to have your typical bank.  Shaped like a pig.  Standard size.  This no longer fits the bill, literally.  This child has squirreled away every dime he has ever acquired.  My husband used his incredible construction skills and cut a hole in the lid of an empty, protein powder jar and removed the label.  And voila!  Club-sized piggy bank.  This held our little economist off, for a time.  I would come upstairs, to find his sweet face lit by lamp light, the top off of his custom bank and his life savings spread out in front of him.  His expression one of delight and satisfaction.

"Can I have a bank account?"  This is what came next. Wow.  This seven year-old baby is getting serious.  No more child's play.  No more porcine shaped bullshit.  No more protein powder foolishness.  He wants something legit.  He wants a record.  He wants his money to make money.  My oldest little is a baller.

And, not only is he a baller, but he has plans.  He has a vision for this monetary sensibility. Do you want to know what he is saving for?  A toy? Nope.  A video game?  Nah.  Get ready for it.......a f**king house.  A house!!!!  My seven year old is accumulating a down payment!  My first reaction was to take it personally.  Anxiety liked that band wagon, so she hitched a ride.  He isn't happy, at home.  But, after I got over the initial shock of this admission, I realized that there could be many other factors, leading to his decision.  Minecraft, for example, where he loves to build his own houses - with multiple kitchens, pools, and views.  Again, baller.  Or the obsession that he has had for streets, roads, and neighborhoods, since he was old enough to talk.  However, I like to think it is that he thought of the highest thing that the could aim for and chose that.

So, this past weekend, I took my oldest and his jar of fortune, to the bank.  I felt so proud, as we walked in there.  My little man was so mature.  Ahead of his time.  A prodigy, even.  Within 60 seconds of waiting in line, I was holding his riches, and he was attempting to hang off the bars of the line barrier.  Okay, so a prodigy with ninja like agility.  After several "get down from there"s and "get off the floor"s, later, we made it to the teller.  She was very kind and explained that we would need to make an appointment, to have the account opened, so that they could make sure that there was someone available to do it.  Anxiety snickered.  I had ignored her earlier mention of how we should have rolled the coins and that maybe you couldn't just walk in, on a Saturday, and open a new account.  What can I say?  I thought the process may have advanced with the times.

Mo money, mo problems.  We made our appointment for the next weekend.  Very official.  My little, big saver, carried his custom piggy bank out a little disappointed, but no less determined.  After all, his initial deposit will be increased by his allowance, by the time the weekend comes around.