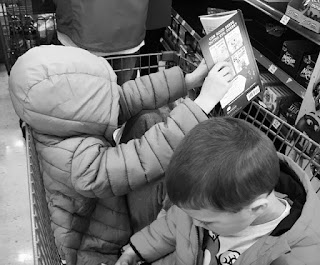 The Canadian tuxedo. Remember that gem?  I am fairly certain that it is no longer a thing, because I see people wearing jean-on-jean, all the time.  And they usually look trendy AF.  I remember not wanting to get caught dead, with that combo.  Double denim?  Double don't you dare.

My husband has his own version of this combo.  He loves to pair a grey sweatpant, with a slightly different hue of grey t-shirt.  Back off, he's mine!!!  No, but seriously, he loves this ensemble.  It has never ceased to amaze me, that no matter how many things he has in his wardrobe, no matter what is clean or what is in the laundry, come hell or high water, he is going to bust this shit out.  His fifty shades of grey.  It has become a well known fact, among our friends and family.  He has not dressed-up for you, if he hasn't appeared in this same, but different, get up.  I know what you are thinking. I am one lucky lady.  And you are absolutely right!

In all honesty, I am no fashion queen.  I mean, I do love clothes.  Always have.  But, I love sweats the most.  Oh...and leggings!  Is there anything better than something that stretches with you?  These extendable wonders have your back.  They aren't going to shame you for having that second bowl of chips.  They are like, "Go on, honey, you deserve those.  We've got lots of room.  For everybody."  Thank you leggings.  No one understands me, the way that you do.

My littles also have their own at home styles.  My oldest never wears pants.  He is not going to be held down by anyone’s preconceived notions about leg coverings.  It is completely unfathomable to him, why anyone would wear pants, when they are in their own home.  I have to say, this logic seems damn sound.  Even if we are having company, he will determine whether their particular relationship with him, warrants him wearing pants.  We have had to enforce the rule, if there are visitors, then there are pants.  Hmmm, I wonder if I could so the same for my husband.  If there are guests, then no grey-grey.  My guess is, no way-way.

My youngest is the sock guy.  He loves having socks on.  I am sweating, just thinking about it.  They don’t have to match and they don’t have to be his.  In fact, there doesn’t even have to be two of them.  He is infamous for lounging around the house, in one sock.  He is just gangster like that.

I have no issue with our pantless, solitary sock, stretchy, one-colour/two tone styles, when we are at home.  However, I like to try and pretend that we are not complete fashion misfits, when we make our way out into the sunlight.  What is this strange place, where people where jeans….or pants at all, even?

My husband, who was dressed in his multi-coloured, “outside” clothes, dropped our boys off at school, the other morning.  As he watched our oldest walking in front of him, he realized that his pants were too short.  We’re not talking, letting him wear them a little longer than we should, because he loves them - short, but, he is wearing capris - short.  I lay out their clothes every night (so they don’t go to school in a two-tone tux), so my hubby knows that something is off.  He then looks at my youngest.  His pants are so long that it looks like he is wearing leg warmers, on his ankles.  He's a maniac, maniac on the floor! You guessed it.  They were wearing each other’s pants.  FFS.  The funniest thing, is that my oldest would have totally know that he was wearing his brother’s pants and that there was a good chance that his father would not notice.  He probably shrugged his shoulders and thought “F**k it, at least I am wearing pants.”.  He better not having been thinking F**k!  He's only seven! So, my hubby had to drag the sweet but questionably dressed littles, into the bathroom, and make them switch.

The Canadian tuxedo?  Maybe one day.  For now, we will focus on wearing the right pants, when we leave the house.  As for the grey tuxedo, the pants that embrace food, the no pants, and the sole sock?  Well, that's just how we roll.  Fashion icons, I like to think.