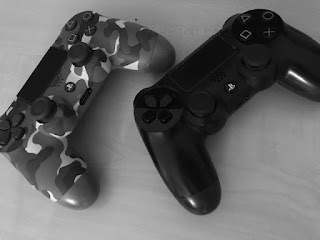 "Because he spawned a village and then burned them all"

My jaw drops.  I glance from my oldest, who made the statement, to my youngest who is nodding his head, quite pleased with himself.  They are partaking in their latest obsession - Minecraft.  My oldest used to play on his own device but then my husband got it for our main gaming system, so now they can play it together.  Isn't that nice?  The problem is that this game has become a constant source of contention between my sweet babies.  It turns them into yelling, crying, pushing brenemies. My oldest wants to build, explore and micro-manage every single thing his brother does.  An entrepreneur, of sorts.  My youngest wants to wreck shit.  His brother's building.  His own.  He has also been known to cover everything in lava.  No one is safe while this kid is in the game.  He is a menace to society, of sorts.

And so exemplifies both my appreciation and apprehension of video games.  I mean, is it naive of me to think that they would be building a charming little village together?  Perhaps, doing a little farming and growing some little pixelated organic fruits and vegetables?  You know, being the best of friends of block people brothers.  Holding hands and frolicking through the vivid green and blue digital landscape.  Sounds lovely!  Sigh.  Instead, we have tyranny and mass murder.

I guess it's not that different from our friends Mario and Luigi.  Instead of making your own warped world, you are just playing in someone else's.  They have everything - kidnapping, artillery,  ghosts, bombs, enemies lurking around every corner, matching overalls.  Nothing says badass like coordinated outfits.  Am I right?  And, for real though, what the f**k is Bowser? Is he a turtle? Is he a dragon?  How can you have a shell and spit fire?  All of the mixed signals makes him one scary.....thing.  The objective of the game?  World domination.  Yikes!

I think I worry about the video games that my boys play because I don't know them.  The devil you know, and all that.  In my case, it is a turdragon...? I also find it unsettling that they could be playing with adults.  To be fair, my first born plays a soccer game online with my husband and his friends.  But,we know them.  And they aren't serial killers.  We put on all the securities we can and try and put off getting new games that require being "online".  However, all the kids are playing these games.  Like how we all played our video games.  It is the way of the future and my babies won't be left behind, dammit!!!

So, for now we will try and persuade our tiny man from burning everything in his path.  Coax the brenemies to become business partners.  Focus on agriculture and expansion.  Get them matching overalls.  Mainly, keeping the spawning and slaughter to a minimum.