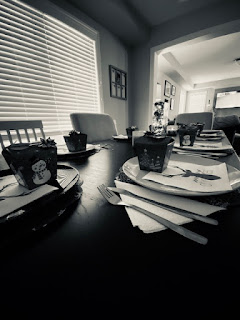 My favorite part of the holidays is the few days between Christmas and New Years.  You know, the short lull between the gift giving, food fixing, endless eating mayhem and the inevitable countdown to the dawn of a new era.  There is still a countdown, right?  I have not made it that late, in many a year.  Honestly, couldn't there be a preliminary countdown for those who can't stay up so late?  Like kids, or...me?  Is that too much to ask?  It could be the kids' table of New Years.

In the few days leading up to Christmas day, I feel like I am in a constant state of frenzy.  Eyes wide, teeth clenched, hair flying in all directions, running from store to store, with my elbows out and my battle stance set.  I literally climbed up on the shelf, at the grocery store, to reach the last carton of molasses.  I scaled that shit, like a mountaineer.  There was going to be adorable gingerbread men, dammit.  Then, you reach the inevitable point of no return.  Not one more store will be visited, not even the Dollar Store.  And as the beautiful littles lay nestled in their bed, the voice of Anxiety can be heard in your head.  You probably forgot something.  Your list wasn't right.  Merry Christmas to all, and to all a second-guessing filled night.

But, then a hush falls over the wasteland.  The big days passes.  A tissue paper tumbleweed rolls by. Everything just seems to slow down.  You wear those new Christmas Eve jammies, for some undetermined amount of time.  You live on cheese, crackers and those gingerbread cookies that you risked your life for.  You grab those sweet babies and snuggle them up, as much as you can.  You take in the completely foreign feeling of not having to go anywhere and not having to do anything.  You tuck in Anxiety,  with your new cozy blanket,  and take whatever peace her resting bitch face will allow.  You know that the new year is coming, and, with that, the return to the crazy shit show of day-to-day life. So, you let the crumbs accumulate on your jamma shirt, hold a child under each arm, and pick that book back up.  It..is....the...best.

Before you know it, it’s New Year’s Eve.  It is 7pm, but it feels like 11:30.  The children that were so well behaved for the arrival of the man in red, and so chill getting to know their new treasures, during that little slice of heaven in-between, have now transformed into end-of-year yahoos.  Lack of routine and an overabundance of treats have combined to give them the ability to consistently speak several decibels above the norm and climb on the walls and ceiling.  WTF???  Okay, I can't be sure the second thing was happening, but that is what it felt like.  You know what would help?  A preliminary countdown.  9pm.  Let's make it happen! #precountdownfor2021

I hope everyone had a lovely holiday from beginning, to in-between, to end!  Happy New Year!