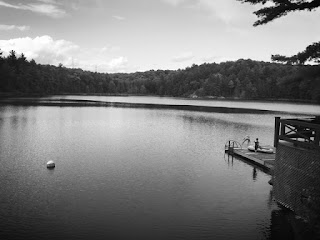 What makes a fear irrational?

Last week, we had a meeting at work. The seating was limited, so a few of us sat on the window ledge, on the perimeter of the room. When you leaned back, your back was against a window. Outside this window was a seven-floor drop, straight down to the street. The minute that I looked out that window, my heart started to race, and I sat straight up and took my weight off of it. What happens if that shit breaks? You go ass over head to the pavement, that’s what happens. I looked to my colleagues who were also seated on the sill. No one seemed concerned, legs outstretched in front of them, full lean into the glass. Anxiety thought I should say something but she wasn’t officially invited to this meeting. Was I really the only one to contemplate this window shattering, falling to your death, scenario? Well, the answer is no. I hesitantly mentioned to the person sitting next to me, that I was worried the glass would break and winced waiting for the eye roll or laughter, at my neuroses. His response? That that exact thought had also crossed his mind. Turns out this fear, rational as f**k.

I’m just going to say it. You know what else is terrifying? Space.  Space scares the shit out of me.  No beginning, no end, infinite black expansion, dehydrated space food. Is there anything more horrifying? “Ground control to Ma...” No, nope.  Absolutely not!!!! Watching a movie about space is scarier for me, than any horror movie.  You are in an endless abyss, with no gravity, helmet breathing like Darth Vader and eating your freeze dried steak.  Space is out of this world scary.

I am not sure if I have mentioned this before, but I have a bit of an obsession with true crime and other sorts of documentaries. One weekend, I watched a doc about brain eating amoebas. Let me tell you, that is something that I can never unsee. In fact, I basically did a TED Talk about it to whomever happened to be sitting with me, in the lunchroom, that following Monday. They seemed to be slowly inching their way to the door, but I am sure they were just trying to find a better seat. These nasty little bacteria demons live in warm water, which can include warm lakes and untreated swimming pools. You jump in, go down a water slide or fall water skiing and water goes up your nose and that is how they can get into your brain.  Fast forward to summer holidays.  A stunning cottage, with the family.  Beautiful lake that is warm enough to be pleasant.  True to form - TED Talk : Session 2, on the deck, about those f**king amoebas.  Screaming like a wild woman at my babies to hold their noses, when they are jumping off the dock.  Googling in bed.  Here's the thing, someone died from those murderous bastards, in one of the southern states, that very week!  Preposterous perturbation?  I think not.  Although, to be fair, the chances of it happening are like one in a zillion.  But, still, plug your nose!!!

What makes a fear irrational?  Damned if I know.  I like to think my fears make me proactive.  Proactive panic.  I lock my doors and windows.  I avoid leaning against glass windows, space travel, and I plug my nose.  We all have our rational as f**k fears.  It's just how we deal with them, I guess.