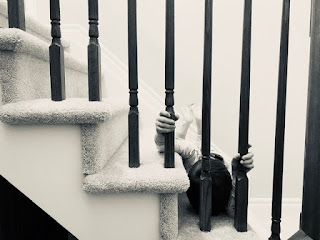 “My tummy hurts.”  I look up to see him laying at the top of the stairs.  His chubby little hands wrapped around the rungs of the stairs.  His cocoa-coloured eyes welling up with tears, as he pears down at me.  He is the saddest stair prisoner I have ever seen.  It is 6:45 am.  On a school day.  I am standing at the bottom of the stairs with my coat on, literally, mere minutes from stepping out the front door to head to work.  Shit.

When I was the same age as my youngest, I clued in that if I said that I didn’t feel well, that I could stay home from school.  Unfortunately, moderation has never been my strong suit.  I used that card so often, that I became the girl who cried wolf.  So, when I woke up one morning to find a mysterious red spot on my stomach, my Mom had to no time for my crap.  In no uncertain terms, she told me to get my butt out of bed and get ready for school.  When the wolf arrived later that morning, I had no one to blame but my faker four-year-old self.  As my belly itched like crazy, I lifted my shirt to see that red spot had multiplied and they now completely covered my torso.  Hence, began the week long itchy, blistery hell that is the chicken pox.  The voracious virus of the eighties.  Ain’t no party, like a pox party and a pox party don't stop!!!!  Until your bleeding.  And scarred.

The memory of my younger self playing the starring role of “too sick to go to school child” crosses my mind, as I  look up and through the bars at my tiny jailbird.  I squint my eyes, as if this will somehow reveal what, if anything, is happening inside his little body.  Every minute that passes, the more likely I am to miss my bus.  And then my train.  Your going to be late.  There she is.  It would be so out of character for Anxiety to miss a moment like this.  I start to run through the usual questions in my head. When did he poop last?  What has he eaten?  Could it just be gas?  Is "the cough" (see File 4 - G Vampires, Denial and the Cough) going to appear?  Is he faking it because he hates school?  As I am pondering these questions, my hubby appears at the top of the stairs and feels our little's head.  He gives me a head shake.  No fever.  Well, that's a start.

Tick, tick, tick.  The time is ticking away, creating the butterfly effect that will ultimately make me late for work.  And so the negotiations begin.  Our sick day shuffle. Who is most able to take the day off, if our sweet little man is indeed sick?  Do we each do a half day?  Does one of us bring him to work?  If he has no fever and eats his breakfast, do we send him to school and take our chances? As I am still wearing my coat, it is decided that I will go to work.  Alone.  As my eye squinting didn't seem to provide any immediate results, Daddy is going to feed him and then make the call.  I take one desperate look back, as I head out the door.  My boy has made his way out of his stairs cell and is slowly making his way to the kitchen.  Anxiety chirps me the whole way to work.  As if you left before knowing what was wrong.  What if he needs you?  Why does Anxiety always have to be so GD extra?

Turns out through deductive reasoning, aka, asking my baby when he had pooped last, we were able to get to the root of the problem.   My husband's solution?  Give him some raisin bran and send him to school.  They call that the Raisin Bran Remedy.  I made it to work on time and he made it through his day.  Sick day shuffle success!  Until next time....