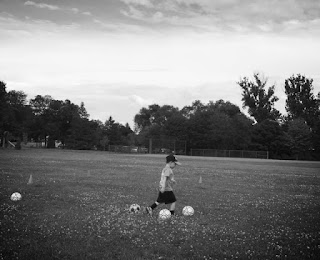 Every year, in March, there is an event that comes around that leaves parents scrambling.   It requires incredible foresight and can create uncertainty and an overwhelming sense of urgency.  There will be highs.  There will be lows.  There will be surprises.  There will be financial obligations.  There will be other F-words.  It is not for the faint of heart.  That's right.  I am talking about summer camps opening for registration.  This shit is no joke.

I equate it to when you are at work and an email goes around that there is food in the kitchen.  You know damn well that you better get get your ass out of your chair, your elbows out and boot it to the kitchen.  It's like the Hunger Games.  There are so many variables that can affect your odds.  For example, the location of your desk in proximity to the kitchen.  Whether you are at said desk, when the email comes through.  If there is someone at your desk.  If you are above pushing that person out of the way, on your way past.  If you are not on your game, you will end up with a quarter of a raisin bagel.  Not on my watch.  When it comes to food, I always volunteer as tribute.

This is like the mad dash for summer camp registration.  Just like those snacks in the office kitchen, you want to be able to choose from all of the available options.  You don’t want to be left with the bedraggled raisin bagel of summer camps.  That would be gross.  This year was tough, because both of our boys needed to be enrolled.  I had this naïve notion that there would be camps that could take a 5-year-old and an 8-year-old.  A good ole one-stop-shop.  Apparently, these two age groups are unable to summer camp together.  Irreconcilable differences?  Maybe…  But, it sure complicates things trying to get them into separate camps, for the same weeks, at the same location.   This definitely limits our choices.  No fancy camps.  We are basically down to the honey-oat, plain, and, yes, raisin bagels of camps.  Oh, and that powdered doughnut with jelly inside.  Why, though?  I mean, to be fair, I would probably eat it.  But, still.

Lucky for us, we were able to get them into the same location, for the majority of the weeks. My oldest gets a variety of themes, which is great.  My youngest is in sports camp.  Does he like sports? Yes...???  I mean, he doesn't seem to hate sports.  He likes running around.  And throwing things.  And yelling.  I am fairly optimistic that it will work.

The best part of this stressful event was the discovery of the coolest kids camp ever - CSI camp.  I. Am. Serious.  Crime Scene Investigation camp!!!!  How f**king rad is that?  Don't worry, they don't have children investigating actual crime scenes.  They aren't monsters!  From the description, which I read several times, they are given clues to solve mysteries.  I was so disappointed when, despite my best efforts, I couldn't figure out a logistical way to send my littles there.  This is the everything bagel of summer camps.  The chocolate-glazed doughnut.  If it is CSI camp, I volunteer as councilor.