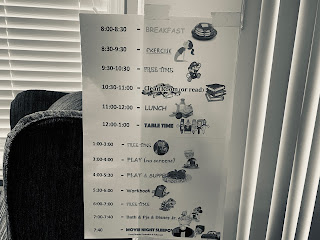 I felt pretty confident going into this self isolation situation.  Let's be honest, I am a homebody. When the weekend rolls around, I like to be at home, in my jammies, with my littles.  And snacks.  And the trinity of Dateline, 20/20 and 48 Hour Mystery.    As I have mentioned before, if I do have some kind of hysterical fit and make plans for Friday, I end up suffering from FOFO (Fear of Friday Obligations) and I cancel.  This idea of social distancing sounded as if it were made for me.

The first couple of days started out promising enough.  I had taken the week off of work, anyways, because it was March Break.  We didn't have any big plans.  We were going to go on a day trip and spend a night in a hotel, go see a movie in the theater, and make a trip to the craft store, in search of creative projects.  Then, some family time and play dates peppered in.  As you can imagine, we had to cancel everything.  The beautiful babies were disappointed, but we explained that we would make up for it with the kids' trinity of movies, video games and junk food.  So it went.  Four rogue humans, living with no schedule, no expectations, no f**ks.  And they lived happily ever after.  Nope.  No they didn't.

After a couple of days, we had lost all track of time. We also seemed to have lost all semblance of basic decency.  And hygiene.  We were essentially human sloths, who communicated primarily by grunting.  The boys shifted between apathy and all out wrestling and screaming their heads off.  Despite our greatest effort, the rock and roll lifestyle just wasn't for us.

Next, came the schedule.  This comprised of a variety of activities, from hour to hour, from 8 am to bedtime.  These included crafts, reading, exercise, and outside time.  Look at us!  We hung it right where the boys could see it.  The first day went great.  Everyone was motivated.  Well, except when it came to exercise time. There was definitely some dissention among the younger ranks.  Apparently, they were "too tired" for the kids workout video that we found on YouTube.  WTF?  I have seen these two show more physical effort, while they are sleeping.  However, when it came to reading time, they became woke AF and were able to act out an entire battle scene from Super Mario, including kicking and punching the air, sound effects, jumping up and down, and side commentary. Schedule schmedule.  Let's be real.  There was no sustainability for the schedule.

New plan.  Get through the f**king day.  Do a little of this and a little of that.  Watch murder docs.  And movies.  Do yoga.  Act out an epic battle with Bowser.  Bonus for side commentary.  Read.  Write.  Eat.  Eat some more.  Be the best damn social-distancer-self you can be.  And know that that is enough.  Even if it is half rock and roll, half sloth.