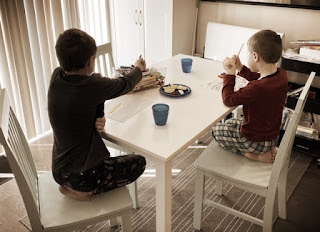 I want my boys to be best friends.  Is that too much to ask?  I want them to have each other's backs and always be there for one another.  I thought that this social isolation would work towards my cause.  You know, move away from the head locks, wrestling holds and referring to each other as different adjectives for human excrement.  Was I naive to think that when the world removed all of the outside influences, that it would make them closer?  Yes I was.  Naive AF.

It has become like spy vs. spy up in this mother, each child hell bent on the other's destruction.  One of them has a virtual class meeting?  You better believe the other is in the background, making faces or holding up random stuffies.  One doesn't like supper?  It is the best thing the other has ever tasted.  Their regards to the chef, wink.  Who made the mess in the living room?  Quick index finger draw pointed at the other.  Holding up their finger guns, the oldest squints his eyes and then the youngest squints his.  It's a good old sitting room standoff.

When it comes to screen time, these two are basically holding a stopwatch and monitoring every last second that the other one is on.  Mentally noting any extra time, to use as leverage, at a time of their choosing.  A time of maximum impact, no doubt.  "He actually had 5.32674 minutes longer on his DS, than I did today."  On the odd occasion, when they can agree on a video game to play together, it immediately becomes a search and destroy mission.  Working as a team?  Bah!  That's for suckers.  I mean, we have Mario turning on Luigi.  This shit has gotten serious.

Through all of this sibling sabotage, I at least had solace in their weekly sleepovers.  Every weekend they have a sleepover, in my oldest's room.  This has been tradition for a couple of years. They get to pick a movie, have snacks, and sleep in the same room.  I would  be lying, if I didn't acknowledge that an occasional brawl occurs at these sleepovers, but it is something that they both love and look forward to.  And I also love this weekly event.  Peeking in to see them side-by-side, their gorgeous sleeping faces lit up from the light of the television.  Best friends, I would think to myself, as I tip-toed out of the room.

This past weekend, it all changed.  Everything started out normal enough.  We had temporarily moved an old TV, into my youngest's room, so that they could have a sleepover in his room.  We are searching for anything to change the daily monotony.  Anyhow, it was Friday night and it has started without a hitch.  My boys were settled into their movie, my husband was signed into his Zoom poker game, and I had settled into some "me time", with all of my shows that had been PVR'd during the week.  Everything was in balance, in home isolation world.  Then, my youngest wandered in to my room.  He wasn't interested in the movie that they were watching and wanted to watch something else.  Quickly, his brother followed, who also didn't really want to watch that movie.  And there we were.  At a standstill.  In my exhaustion, I asked if they wanted to split up and watch their own movies, in their own rooms.  Before I could even process what I had suggested, they had both enthusiastically agreed to the idea.

"I just want them to be best friends."  I blubbered to my husband, after I had knocked on the door and interrupted his poker game.  I was whispering and cowering behind a wall, as to not be seen or heard by his friends on Zoom.  He did not seem nearly as distressed by this development as I was, no matter how many times I repeated that they were in separate rooms, watching separate movies.  The Brothers Spy had worked together to do one thing - yank this Mamma's heart right from her chest.  Later, when I saw their separate beautiful sleeping faces, in their separate rooms, I made myself a vow.  As much as they work against each other, I will work on bringing them together.

Does Mamma need to lose her shit?