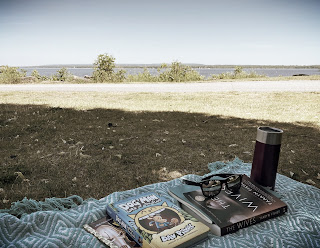 I did something totally crazy this week.  Something unplanned, which in my world is the equivalent of jumping off a cliff.  Something just inside the lines of legal.  And it wasn't bringing my kids' books on a picnic, expecting that they would sit and read them.  No matter how f**king delusional that was.  No.  It wasn't that.  It was even more deranged.  I...took my boys....to the splash pad.

It was a really humid day.  The type of heat, where you sweat just from breathing.  We had ventured out early, to get out of the house and have a picnic.  We found a lovely spot in the shade and set out our blankets.  I pulled out my overly ambitious collection of reading material that I had packed for us.  A girl can dream, right?  The littles spent a short time playing and looking for animals and bugs. Next, they devoured everything that I had packed in the picnic.  Followed by "I'm still hungry."  Then, the dreaded and ever so infuriating, "I'm bored."  I wiped the drops of sweat from my brow, caused from the exertion of rolling my eyes so hard at them.  I held up the assortment of graphic novels and Star Wars books, still holding out hope for an afternoon of lounging and literature.  Seeing the desperation in my eyes, the boys each took a book and opened it.  Then closed it.  "Can we go now?"

By the time that we were back at the car, we were flushed and roasting.  At which point, we were walloped by a wall of humidity, when we opened the car doors.  As we drove, I remembered that the city's splash pads had just reopened for public use.  What would be the harm in driving by one and seeing if it was busy?  Anxiety was having a complete COVID conniption. Her voice was a shrill scream in my ears.  I clenched my eyes shut, willing her to STFU. When we arrived, I noticed that there were only three other children running through the sophisticated sprinkler system and they all seemed to be in the same family.  These were odds that I could work with.  I mean, it was a large space.  The other parents would respect the rules of social distancing and force their kids to let my sweet babies have a turn at running through, right?

Wrong AF.  My boys waited on the edge of the splash pad, for the others to clear, so that they go in. Every time that my boys took a step into the area, the others would come running back in, with no regard for the required distance.  As I wildly screeched the boys names and grabbed them by the arms, pulling them back to the perimeter, I started to rethink my choice.  But then, after about 10 more minutes of waiting and false starts, the most amazing thing happened.  The other family later day'd out of there!  All of a sudden, we had the whole splash pad to ourselves.  The boys ran through the water, screaming and giggling.  The sun shining off of their gorgeous smiling faces.  Their heads thrown back in laughter. And it was the most beautiful thing that I have seen, in a long time.

Did we do something that was crazy and unplanned?  We did.  Well, maybe not too crazy.  We left once the water turned off, because I wouldn't let the littles touch the button to turn it back on.  Was it worth it?  It was.  Was it more crazy to expect my boys to sit and read on a picnic?  That is a matter if opinion.  I will still bring a bag of books.  Every. Time.