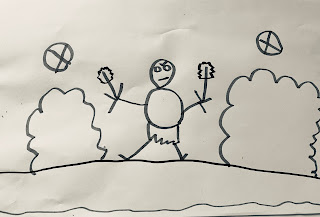 I have become quite the art collector, over the last several years. At times, acquiring several new pieces in a single day.  Although, it is all comprised of two artists, their anthologies are vast. Their mediums diverse.  There are markers, pencil crayons, crayons, and paint.  At times, even stickers and tape.  There really is no limit to their artistic prowess.  Just endless elementary expression.

Upon further exploration of these masterpieces, however, there seemed to be one important thing missing.  I searched among the 2D structures and stick figures, with their down-arrow eyebrows and triangle teeth.  The superheroes, robots and video game characters.  I couldn't find any of what I was looking for.  So, I asked one of the artists to explain his latest pieces.  He went on to explain the good guys and the bad guys, the boss guys and the worker guys.  It was just as I had speculated.

"Are there girls in any of your pictures?" I asked the petite artiste.  He seemed momentarily stunned by the question.  A frown crossed his beautiful face and then something that resembled pity.

"No, Mom. There aren't any girls," he scolded.  Followed by a sigh that seemed a little excessive in length.  Great, I've offended the artist.  But, still....

"Maybe next time you could include a girl in your picture?" I ask him.

I may be the only female that lives in this house, but this child is surrounded by strong women.  Gangster grandmothers, bad-ass aunties.  Yet, there are none in any of his pictures.  NONE.  Frustrated, he takes his male dominated portraits out of my hands and heads back to the table.  Marching like the little creative genius he is.  I saw him take out a fresh piece of paper and a marker to start something new.  There, I thought.  I have made my point.

"But, Mom, the girls are going to be workers," he called from the other room.

I thought back to the last picture that he had showed me, with the boss and the workers. Okay, so I made part of my point.  This may be more problematic than I had realized.

"Why do they have to be workers, honey?" I kept it light and braced myself for the response.

"Because girls aren't bosses," he replied, his tone matter-of-fact.

"Actually, girls are bosses," I said, firmly, fighting the urge to throw in a hashtag girlboss.  Feeling powerful in imparting this information to my sweet boy. Feeling ashamed that I have to.

"Ya, but there are more boy bosses than girl bosses." Mic. Drop.

Great...  I turned to address my little sketcher but his head was still buried, as he perfects his girl workers.  Again, problematic AF.  But, this is a big conversation. And one that I want to have with both of my art aces.  One that may require a slide show and a reading list. Possibly, a quiz after. A femducation, if you will.