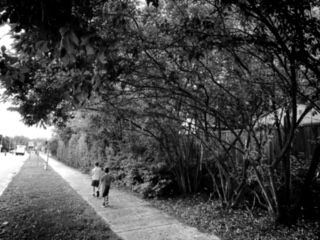 "Did you tell Daddy about the murder that we saw?"  My husband had his back to me, but I saw him tilt his head to one side at my inquiry.  I mean, luckily, my babies and I did not witness the actual act of murder.  However, we did encounter a group of crows, on our walk that afternoon.  I obviously took this as a teaching moment.  I excitedly explained to my boys that a group of crows was called a murder.  That was after I had made them freeze on the spot.  I had to ensure that there was no boy with dark hair and a funky cowlick.  Also, I had to make sure that they were not summoning any of their crow friends, for a hidden path sneak attack.  Even though the murder dispersed when we approached, I could see on of them giving us the side eye.  It was caw-ful.

Although I love imparting fun knowledge on my littles, I have started to realize that my obsession with true crime, may be becoming problematic. It hit me the other day.  I was getting the boys one of their midmorning snacks.  Yes, that's right.  ONE of their midmorning snacks. FFS.  After I had finished chopping up their fruit, I took the knife and a paper towel, and came out of the kitchen to talk to them about something.  Both of their eyes got huge and they moved towards each other on the couch.  Confused, I continued on with what I was saying.  These kids and their nutty shenanigans.  They literally had each other in a head lock mere minutes before.  Then they both started nervously laughing and looking at my hands.   I had been nonchalantly cleaning the knife, with the paper towel, while I had been talking to them.  When I understood what they were talking about, I knew what I had to do.  What my responsibility was as a Mom.  I started to clean the knife with more purpose and made crazy eyes.  Then, I threw my head back and started laughing like a maniac.

The boys both jumped and let out a scream.  I laughed, but then I couldn't help but wonder.  Did my sweet babies actually think that I could be a murderer?  They know that I have an interest in such things, because they have heard it brought up in passing many a time.  "Don't go in there, Mommy is watching murder."  "Mommy is listening to her murder podcast."  But, I never actually thought that they would think that these interests were instructional, rather than cautionary.  I thought when they made comments like "I will make your house far away from Daddy's in Minecraft, in case you want to murder Daddy", they were joking.  Or, that they could read my mind.  It never crossed my mind that they could actually think that I was dangerous.  It could be that my passion for any type of true crime chronicle has painted me in a homicidal light.

Time to leave the murder talk to the crows.  No more mentions of the ID channel or the podcasts.  I didn't necessarily break character on the knife cleaning and crazed laughing, because once you go for it, you have to commit.  Not as in commit a murder.  You know what I mean.  It was caw-mical.