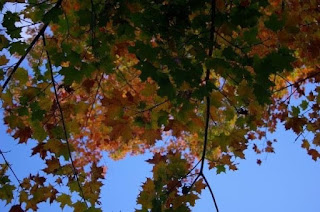 October is the best.  It is a time to reflect on all things that are unsettling, scary and spooky.  When you get to spend time with old friends like Jason Voorhees, Michael Myers and Jack Torrance.  Everyday things become more eerie, illuminated by some unseen light, with horror music playing on loop.  A walk to the mailbox feels like a scene out of Halloween.

This past week, I had to go to the hospital for an MRI.  They book these tests at the haunting hours between midnight and 7am.  When I drove to the hospital, it was the wee hours of the morning and still dark outside.  There were next to no cars on the road.  Well, except for the truck who pulled up behind me.  As the big headlights reflected in my rearview, I slowed my vehicle so that the truck could pass.  There was nothing but open road.  But, the truck did not pass.  I squinted against the light, but could only make out the silhouette.  I wondered what was more likely.  Did this person also have an appointment with the space machine at the hospital?  Or, was it a murderer, who was going to hit my car and then attack me when we pulled over to exchange information?  As I weighed my options, and my possible escape plan, the truck turned off.  I guess it was neither.

It was with this heightened sense of apprehension, that I arrived at my destination.  After I got through the entrance, I followed the directions that I was given.  The further that I moved into the hospital, the darker and more quiet it got.  The only sound becoming my shoes squeaking against the floor and my anxious breathing behind my mask.  All the waiting rooms were shadowed, the chairs empty.  The ceiling light flickering at the end of the hall.  Honestly, this is the shit that horror movies are made of.  I half expected to see the truck driver killer behind me.

After a wrong turn, and a terrifying minute and a half when I thought that I was lost, I made it to the MRI.  All of my senses were on overdrive, at this point.  Luckily, this wasn't my first MRI because, let me tell you, those machines look like a torture device from space.  And space is scary AF.  As I settled into my test, I heard the comforting voice of the tech in my ear, asking if I was okay and letting me know that I had been in there for about three minutes, so far.  As was customary, he would check in a couple of more times.  However, he didn't.  The rest of the test went on without a sound.  Well, except for the typical brain jarring, mind scrambling sounds of the machine itself.  Nothing from the tech.  Not. One. Word.  Then the machine stopped.

This was it.  The truck guy had broken in.  He had attacked the MRI tech.  And now I stuck inside this space machine from hell.

I guess it was neither.  That's the thing with October. Everything is unsettling, scary and spooky.  Queue horror music.