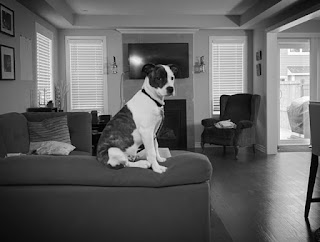 Anxiety is extremely passionate.  Maybe passionate isn't the right word.  Obstinate.  Stubborn. Annoying AF.  This week I had to take our puppy boy for shots.  This is one of those situations where Anxiety really gets turned up.  I mean, her verbal battery starts days in advance.  She is relentless. Always leaving unease and awkwardness in her wake.

This puppy appointment reminded me of when my boys were babies and I would take them in for their needles.  Anxiety would start her tirade the week before.  He hasn't been sleeping very well, he is going to be overtired for his appointment.  He isn't finishing all of his bottles, the doctor is going to say he is underweight.  Speaking of weight, the scale was another point of panic.  It was metal and had sharp edges.  I always thought it was something that looked more like it was meant in a butcher shop, rather than a doctor's office.  And it was always freezing!  The baby is going to scream and flail, and the doctor isn't going to be able to get his weight.  Anxiety wasn't going to miss out on the scary scale.

By the time I would get to the day of the appointment, Anxiety had worked her malicious magic, and I would be a complete scattered, sleep-deprived psychopath.  Then, the bag packing.  That is definitely something that I do not miss from their babyhood.  Receiving blankets - but how many?  Extra clothes. Diapers.  Wipes.  Snuggle toy.  Soother.  My sanity.  Now, where did I leave that last item....  All the while, Anxiety continuing her diatribe.  You are going to be late.  You are going to be too early and the baby is going to get agitated waiting.  You are going to miss nap time.  Don't forget you have to put him on that metal meat scale and they are going to poke him with a needle.  By the time that the appointment was done, and everything went fine, I was completely exhausted from worrying about it all week.

What I wasn't expecting was to have the same angst with the puppy.  It has been several years since my littles were babes and I feel like I have gained more control over the imperious interloper that lives in my brain.  Yet, as this vet appointment approached, so did Anxiety.  I mean, seriously?  She is dogged. Like a dog with a bone.  Per-pet-ual???  There she is, preaching her usual dogma.  He's going to be terrified in the car. He is going to poop on the floor. He is going to do that puppy bitey thing.  Pitey? He is going to have stranger anxiety.  We are calling Oreo our pandemic pup, because he is exactly that.  We got him at a time that it makes it really hard to socialize him and introduce him to new places.  So, he is still a little leery of people and places.

Regardless, our pandemic puppy did great.  He may have hidden behind my legs at the start and put his entire head in the treat bin that the vet had, but he was such a good boy.  No poop and no pitey. And I was exhausted.  Anxiety and her constant barking had taken its' toll.