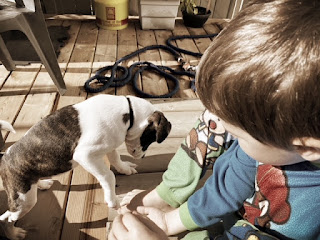 "When is your hair going to go back to normal?"

You know that saying about sticks and stones?  I understand why this rhyme is something that is taught to children.  It is because they are ruthless. They drop these "observation" grenades and they cooly walk away from the explosion.  Putting the little in belittle. The insults packaged in big brown eyes, chubby dimpled hands and hair that smells like sugar.  It's all very confusing.  Cuteness and criticism. It is a match made in some kind of infantile inferno.

The afore mentioned hair comment was not a total surprise.  Despite my husband's best effort to prepare the boys when I chopped my long hair off, my youngest was not here for it.  Nothing to crush your new hair confidence, then to be told that it is creepy.  But, I shrugged it off.  It was a shock to them and maybe being creepy isn't such a bad thing.  Maybe if they think that I am creepy, they will listen to me more.  False.

This has not been the only pernicious perception from this small scrutinizer.  There was the off the cuff comment that he made about the size of my stomach.  That hit me right in the gut.  I decided that he meant big as in bigger than his, because I am a grownup, and not just big in general.  Right?  Then, there was the comment about my being bossy.  All the time.  Apparently.  Maybe it wouldn't seem that way, if they had listened to me and my creepy hair, the first time.  He didn't mean bossy per se, I am sure he meant steadfast.  Committed.  Possibly, the worst thing that he has said, hit me right to my core.  He said that he hates books.  He used the word hate and the word book, in the same sentence. What's worse, he said that books were stupid.  My jaw hit the floor.  Now this was personal.  I may be a chunky micromanager with haunting hair, but I will not stand for the belittling of books.

Adding insult to injury, he also feels the needs to share his exasperation with others.  I often hear him telling on me to his teachers and entire class, in his virtual classroom.  "Just for you to know, my Mom said that I can't have paint for class."  "Just for you to know, my Mom forgot to print off that worksheet."  The mic on the Google meet the perfect instrument to share all of his grievances.

Are sticks and stones worse than the observation grenades?  I guess it all hurts when it lands.  I just whisper to myself before I fall asleep at night.  "Your hair's not creepy. You have an adult sized stomach.  You are not that bossy.  Books are life.  Life.  Don't forget to print out that worksheet in the morning."